The prototype ASV fitted into a 5U wide MOTM format printed front panel from Scheaffer. The knobs used in this build are Davies 1900H clones (small), MXR clones (big), and Davies skirted (medium).

The Oakley Analogue Synthesiser Voice, or ASV, is a complete analogue synthesiser in a 5U wide, or four MU width, module for the MOTM and MU formats. It consists of the traditional synthesiser architecture of two oscillators feeding a single filter, via a mixer, and then to an amplifier. Two identical four stage envelope generators (ENV1 & ENV2), and one sine wave low frequency oscillator (LFO) act as modulation sources to control the sound in a dynamically interesting way.

Each voltage controlled oscillator (VCO) is based around a classic sounding sawtooth core. VCO2's frequency can be hard synchronised to VCO1 by a front panel switch. Both sawtooth and variable width pulse waves are generated. These are both available from the socket field but only one from each VCO may be selected in the audio mixer that feeds the filter. An additional triangle wave from VCO1 can mixed with the audio signal from the filter prior to the final amplifier.

The ASV also has a sub-oscillator. This produces a triangle wave output that is half the frequency of VCO 1, that is, one octave below the pitch of VCO1. By default this is sent to the third level control on the mixer although this can be overridden by inserting a jack plug into the 'mixer in' socket. The sub-oscillator's output is also available on the socket field.

The pitch of both VCOs may be controlled by a master tune control on the front panel. Two octave switches independently control the base pitch of each of the VCOs. Each switch covers a range of three octaves. The pitch of VCO2 may also be offset from VCO 1 by the VCO 2 Tune control. The range of this control covers just over one octave from unison at the 9 o'clock position to an octave above at around 3 o'clock.

Pitch may also controlled by external control voltages (CVs) and internal sources such as the LFO and ENV1. Front panel pots control the depth of this modulation.

The pulse wave output from each VCO can be manually controlled by the pulse width controls. At their middle settings both pots will produce a 50% pulse wave, ie. a square wave. The pulse width of both VCOs can be dynamically altered with external CVs, or internal sources. Both VCOs use special circuitry to make the their average voltage output equal to zero. This reduces audible thumping when the pulse width is modulated quickly. 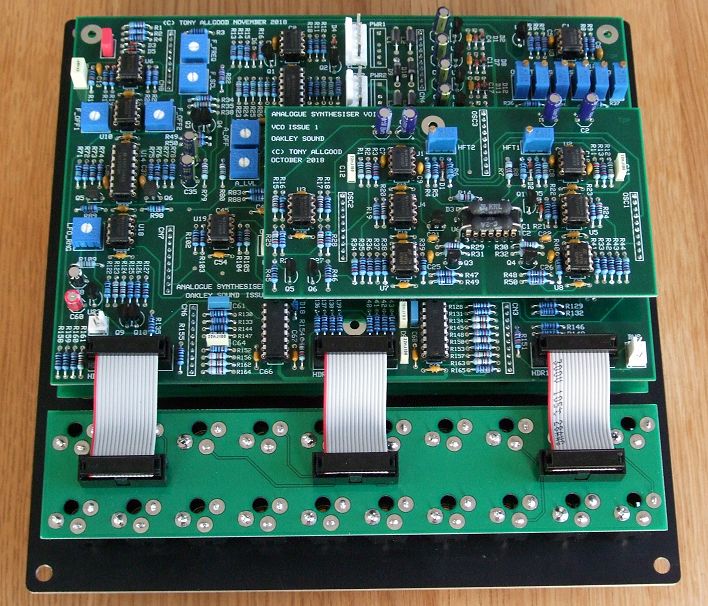 The ASV, here mounted on a MOTM format panel, uses four printed circuit boards all parallel to the front panel making for a shallow module.

The audio mixer normally sends its output direct to the filter although this can be broken by using the 'filter in' socket. In this way it is possible to process the mixer's output by taking a signal from the 'mixer out' socket, feeding it through another module, and then back into the AVS via the 'filter in' socket for final processing.

The voltage controlled filter (VCF) is a state variable design based on the one in a classic synthesiser first seen in the early 1970s. It has two basic modes, shape and band pass (BP). In shape mode the output response is controlled by the Shape control. Fully counter clockwise the response from the filter is -12dB/octave low pass, and fully clockwise it is -12dB/octave high pass. Between the two extremes are a variety of responses and half way around, ie. the control is pointing upward, you get a notch filter which attenuates a single frequency. The filter has a separate resonance control where increasing amounts will accentuate the frequencies heard around the filter's cut off point.

The filter's cut off frequency is controlled by a front panel pot and several modulation sources including ENV1, LFO, and VCO2. The 'ENV1 accent' socket allows an external CV to additionally control the level of ENV1 reaching the filter.

The voltage controlled amplifier (VCA) shapes the volume of the signal leaving the filter. It is solely controlled by ENV2. Both ENV1 and ENV2 are triggered by a single gate signal present at the gate input socket. If no jack plug is inserted into the gate socket then both envelopes are held in their sustain phase, as if they are permanently gated on. The gate LED will light green when gate is active.

The ASV's LFO is a wide range oscillator that will go from very slow to around 120Hz. It produces a sine wave output which is routed internally to certain functions and is available on its own output socket. 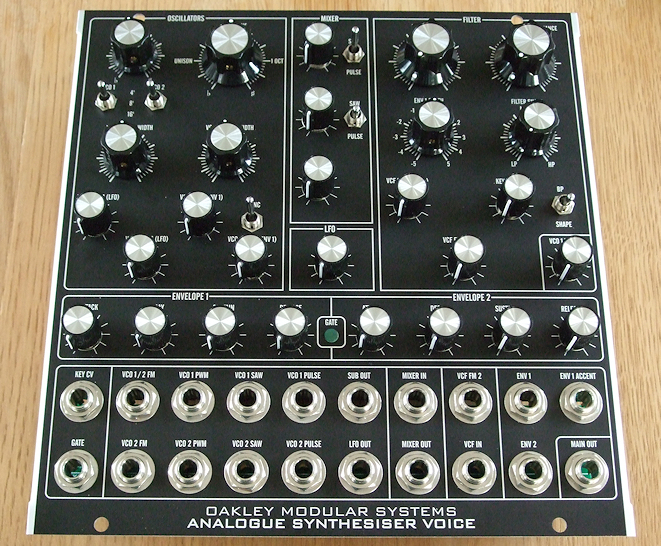 The ASV fitted to a four unit wide MU panel from Re:Synthesis. Sadly these panels are currently not available.

The module is built from four printed circuit boards populated by through hole components. The four boards are: The double layer pot/switch board which holds the front panel potentiometers and switches, and some supporting circuitry. The four layer main board which has the majority of electronics such as the filter, envelopes, LFO, oscillator pitch control and sub-oscillator. The double layer socket board which supports all twenty 1/4” jack sockets and is connected to the main board via three detachable ribbon cables. And finally the four layer VCO board which as its name implies has the core of the two voltage controlled oscillators and pulse generators.

The module requires +/-15V at around +/-160mA which is supplied via two MOTM/Oakley, or MU, power headers. MOTM/Oakley power leads are to be preferred as they are more rugged and can carry more current without problems. Whichever you choose two power leads are required for normal operation. No harm will come to the module if only one power lead is connected but some functions will not work.

The main board and pot/switch board are both 203mm (wide) x 143mm (high). Once completed the depth behind the panel of the module is approximately 55mm. 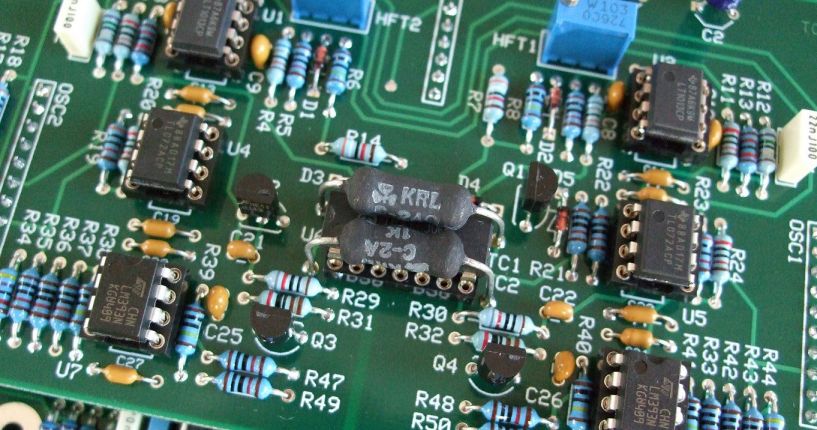 The two temp co resistors that help maintain VCO scaling. All components are through hole throughout.

A simple riff manually played showing the dry signal from the ASV. This is the filter in high pass mode with the triangle output direct to the VCA turned up.

A bass drone. Two sawtooth waves band pass filtered with the filter being modulated by the internal LFO. Reverb is used for ambience.

A dry recording of the ASV's second VCO being pulse width modulated by the internal envelope.

The ASV doing the classic sync sweep sound. A sawtooth waveform is used with the pitch of VCO2 being swept with the internal envelope generator.

A long recording of the ASV playing a looped simple sequence while the filter's and level settings are manually tweaked. A very simple delay is used to create that Berlin School vibe. About half way through I turn up the sub-octave level. If you're listening to this on half decent speakers you'll hear it.

A quick and dirty improvised set with one overdub. The first track recorded is the sequence line. This is just the ASV being played by a simple sequence and manually tweaked to provide variation. A basic delay and reverb are added. The overdub is the ASV being manually played from a keyboard with aftertouch controlling filter cut-off and modulation amount (using an Oakley VCO Controller module). Heavy use of delay and reverb add to the mood. The strings in the background are provided by a Nord A1. 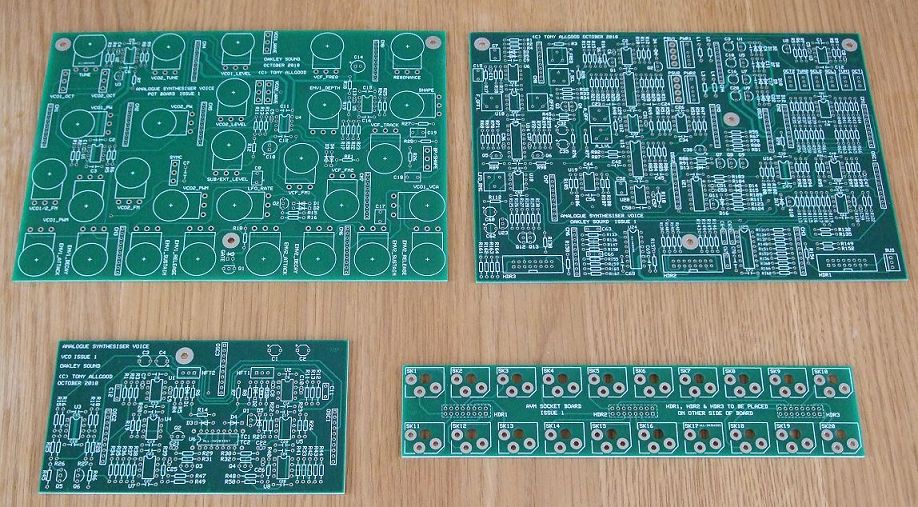 All four PCBs are required to make one ASV module.

* The shim panel is only needed if you are using the thinner MU panel similar to that which was available from Re:Synthesis.

All other parts can be purchased from your usual electronic component supplier with the exception of the AS3310 which is available from Electric Druid, Thonk and others.

Before building any Oakley project please ensure you have the most up to date documentation.

Schematics are available to purchasers of the PCBs and will only be sent via e-mail when the board(s) are shipped.

You can edit these to suit your own panel design or print it out to use as a drilling template.

To read these files you will need a copy of 'Frontplatten designer' from Schaeffer. The program also features on-line ordering. The company are based in Berlin in Germany and will send out panels to anywhere in the world. Delivery to the UK normally takes around ten days. For North American users you can also order your Schaeffer panels from Front Panel Express.

For technical support on all Oakley projects please refer to the knowledgeable and helpful Oakley Sound Forum which is hosted at ModWiggler.com. Tony Allgood does not provide official building support for Oakley projects, but he and many others are usually available for help via the forum. 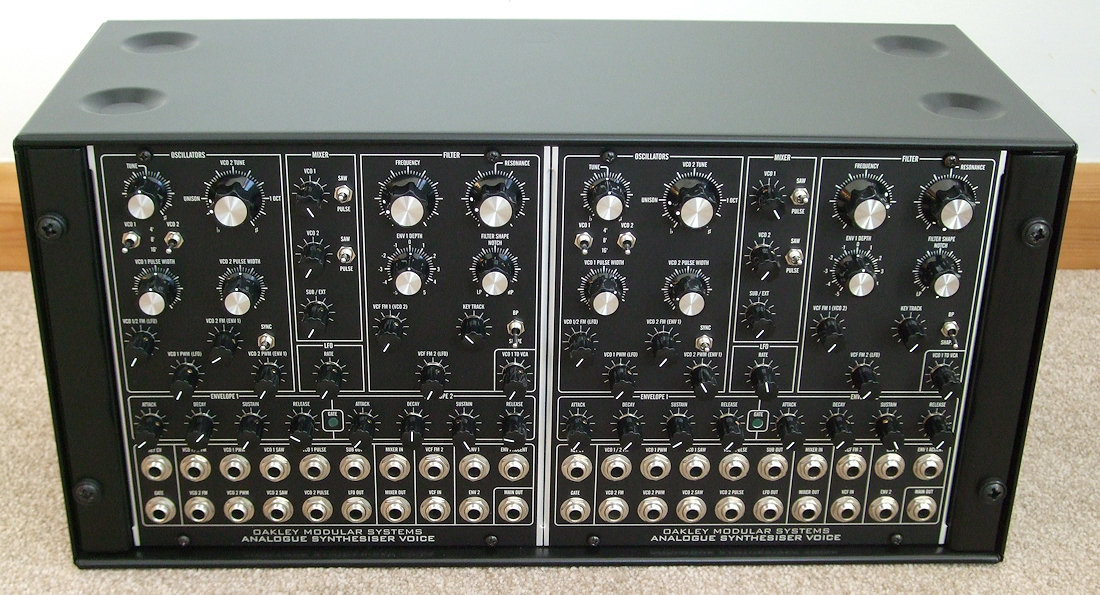 Two MU format ASVs fitted into a 5U high 19" rack case from 'All Metal Parts' with Synthesizers.com's 19" rack rails to hold the modules in place. This particular case is 200mm deep. The smaller control knobs are Davies 1900H clones. The power supply is built onto a 5U blank panel fitted to the rear of the case.

Back to projects page: Projects